Since Oracle has decided to charge enterprise customers with upcomming JDK11 and JRE11 people need to look for alternatives. There is OpenJDK around that can close the gap.

As you may expierienced in past - Oracle has changed the MSI files embedded into their EXE setups in version 8.x a few times and cleaned up their installer a lot. At first thought it was a WTF are they doing there in the middle of 8.x, but on the end it became clear that they cleaned up the 8.x installer only. It was an outgrown mess over the years and full of garbage. However - they broke the ability to deploy it easily. Now after the setup cleanup a lot of knowledge and guessing is required to fix the MSI database and make it installable via AD GPOs. It is clear that they like to sell the customer only enterprise MSI installer that nobody want to pay $ 100K for. With Java 9 they started to hide the MSI file more. The MSI files are no longer extracted to TEMP folder if you run the EXE setup. But it is still an MSI and this goes into C:\Windows\Installer folder. You can still make a snapshot of a virtual machine, install Java and grab the MSI from the Installer folder.

Now with Java 11 and later Oracle plans to release a new major Java version every ~6 months and force all end users to upgrade to the latest version. Java version 8.x is no longer supported after January 2019 without a payed LTS contract. Long term versions are than only available to enterprise customers. Additionally enterprise users always need to license their servers and client computers running Java. They are no longer allowed to use the end user Java versions. End users are not affected by this change.

Eclipe foundation is also on the way to migrate to OpenJDK with OpenJ9 JVM. It is documented that this OpenJ9 JVM is a lot faster than the standard Hotspot JVM. Therefore Eclipse Team plans to integrate the OpenJDK with OpenJ9 into Eclipse installers soon. Looks like more and more are done with Oracle the Axis of Evil.

Before you need to sell your house and/or have nothing to eat any longer - there are solutions required; if you have the need for a Java application. I personally suggest to analyze if you can get rid of every Java based software very first and plan the decommission immediately. If this decommission is not possible you can try using OpenJDK packages. As of writing the OpenJDK project https://github.com/AdoptOpenJDK had no installers at all. As there is a serious need for many people to deploy Java in Enterprise without paying Oracle tens of thousands of dollars there has been an MSI installer developed by me for the open source AdoptOpenJDK project.

Files attached are the multilingual installers. Currently some translated strings may be missing in some languages, but German is complete. If you are able to translate to other languages you can download the Lang files and translate them. Please create a pull so we can get your translation into the installers. 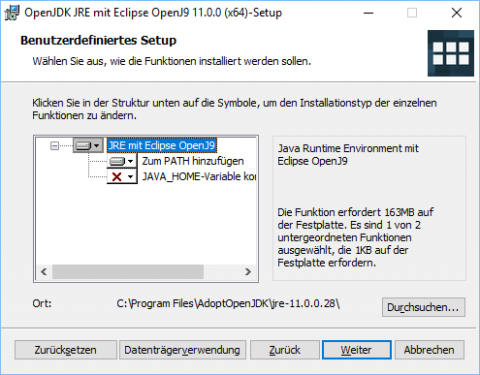